Kupppaimeni – The Ayurvedic One in All Herb

Kuppaimeni is a small herbaceous plant grows up to 75 cm. Widely known as Indian Acalypha it has been botanically termed as Acalypha indica.

It can be found in wastelands and roadsides in tropical lands of India, Pakistan and Africa. Ancient Indian medical books evidence its therapeutic benefits as a remedy for skin disease, intestinal worms, Asthma and other inflammatory conditions. 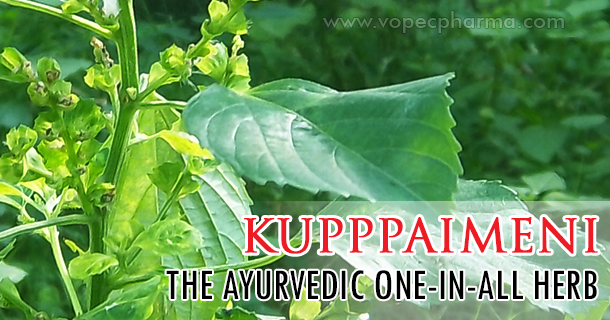 There are many medical benefits of Acalypha and here they are:

Any local injury or infection in the joint leads to their damage and in some it may begin after excessive or improper use of joints like excessive walking, jogging and travelling in jolting vehicles.

Degenerative changes and autoimmunity are the other major reasons for joint damage. Damaged joint structure causes severe pain and inflammatory reactions in the joints such as severe pain, swelling, redness, tenderness and feeling hot to touch.

Kuppaimeni is an analgesic and anti-inflammatory herb relieves these symptoms when taken internally in the form of decoction. Pounded Kuppaimeni leaves added with lime can be applied externally over the joints to get rid of joint pain & swelling.

Worms are small parasites that live inside the gastro intestinal tract. They cannot be formed inside the body they are derived from outside through unhygienic food, contaminated water and sometimes through direct contact with infected skin.

Children are more prone to worm infestation because of unhygienic practices like refusing to wash their hands after playing with infected soil .Traditionally Indian Acalypha has been reported as anthelminthic herb, its leaf juice and decoction have been recommended as a remedy for intestinal worms.

Powder made of Acalypha leaves mixed with garlic can be given to children for worm removal; due to its anthelminthic activity worms will be immobilized, destroyed and eliminated through stools.

Skin is the biggest organ of the human body that supports microorganism like fungi and bacteria to live on its surface. Approximately 1 trillion numbers of bacteria can be found in the epidermis (outer skin layer) and upper parts of hair follicles which cannot be removed by simple washing.

Some of them are harmful and some known to be beneficial. This harmful bacterium causes ulcers and other skin infection in persons with weak immune system. Acalypha has potent antimicrobial activity against pathogenic bacteria and fungus and effectively neutralizes the infection caused by them.

Tags: Kuppaimeni
« Bid GoodBye to Cough with Kandankathiri
7 Essential Things a Woman Should Do »