Vallarai is a small perennial herb commonly found as a weed in crop fields and waste lands. It has been treasured as a brain tonic, memory booster and antioxidant in Indian medicine. Every single part of this herb has its own medicinal value and useful in treating infections, anemia, fever, asthma and cough.

Though it is widely known as Indian Pennywort, it also has a peculiar name Saraswathi, symbolizing the Indian Goddess of Knowledge and memory. Tamil Siddhas named it as Yojanavalli; meaning, the small plant that improves a rich thought process. This ancient system of medical science considered Vallarai as one of the most suitable vegetables for digestive health and recommended its use in daily food. 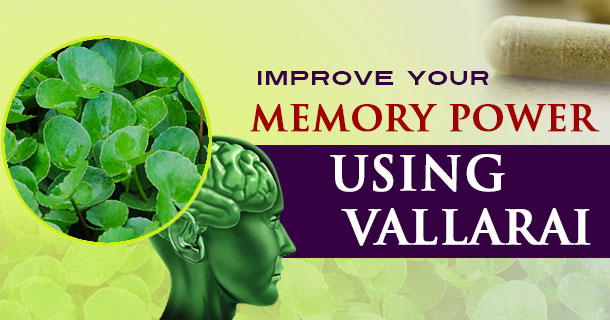 Vallarai is a coolant and astringent herb that acts as a diuretic and digestive agent. It helps in flushing out internal toxins in the excreta. It also clears throat infections, improves complexion, and provides strength to the body. It has been treasured as a sacred herb for improving one’s lifespan and to regain youthfulness.

Regular intake of Vallarai leaves’ juice has been recommended in Charaka Samhita as a ‘Medhya Rasasyana’ (good medicine). By taking this medicinal herb, a person can regain and preserve good memory power, good strength, improved digestion, good voice and an enhanced complexion. Vallarai powder mixed with milk can be given to children for good memory and learning ability. Vallarai made as a curry can be included in daily intake at least for twice a week for better memory and concentration power.

Recent studies reports that Centella asiatica is a neuro-protective and antioxidant herb. It protects the brain cells by enhancing the phosphorylation of CREB (Cyclic AMP response element binding protein) in neurons. It enhances the expression of antioxidant enzymes like superoxide dimustase, catalase and glutathione Wound Healing

Wound healing is the process of natural skin repair influenced by blood supply. If the supplied blood is contaminated by infecting organisms or if a person is diabetic, wound healing will be delayed and may lead to secondary infections. To purify the infected blood and to enhance the natural healing process, vallarai powder can be taken internally and applied externally over wounds as well. For wounds that have not healed for a long time now, the best solution is to apply ground Vallarai on the affected area and to wrap it up with a bandage.

After a heavy meal or followed by an antibiotic course, stomach upsets are normal. These factors increase the internal heat (Pitta) and cause ulcers in gastro intestinal tract which leads to gastritis, diarrhea and dysentery. To get rid of these complaints, making a paste of 3-4 vallarai leaves along with cumin seeds, and then mixing it with sugar and gulping the mixture down will prove to be beneficial. According to Ayurveda,Vallarai pacifies Pitta and arrests diarrhea and dysentery.

Fever or raised body temperature is actually a signal that indicates the immune response of the body against the entered microorganism is slowly being defeated. Usually it lasts for 2-3 days, but if the microorganisms are very strong or if the immunity of the individual is not strong enough to destroy them, fever lasts for more than 3 days. However, it should not be ignored if it lasts more than three days. To improve the immunity of a person and to destroy the microorganisms, one could use a paste of Vallarai, Tulasi (Basil) and Black pepper mixed in equal quantities and ground finely. This paste can be consumed twice daily for the body temperature to return to normalcy.

One Response to “Improve your Memory Power Using Vallarai”