Bid GoodBye to Cough with Kandankathiri

Kandankathiri is a creeper commonly found in waste lands across India. It bears small berries with striations on it. It bears blue colored flowers. It is easily distinguishable from other herbs because of its thorny presence all over the leaves and stems. It has been named as Kandankathiri, as its flowers and resembles the flowers of Eggplant (Kathiri in Tamil). Kandankathiri is botanically named as Solanum xanthocarpum and grouped under Solanaceae family. The presence of thorns is another reason for its name (Kanda means thorns in Tamil). In Sanskrit, it is termed as Kantakari the plant which has thorns and is grouped under “Dasamoola”; a group of ten best root herbs beneficial in treating cold, cough and fever. 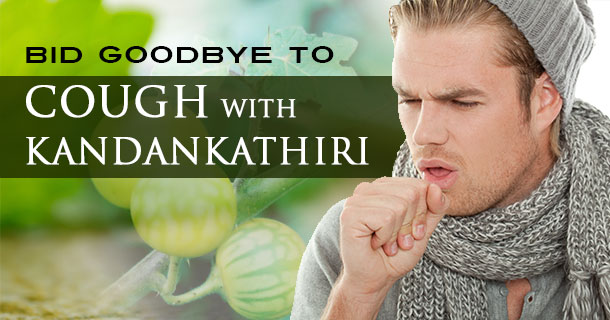 Kantankathiri is pungent and bitter in taste, but its bitterness vanishes once digested. It absorbs excess moisture (water accumulation) inside the body and causes dryness. It is hot in potency, hence effectively counteracts with cold, flu and sinusitis. In English, it is commonly known as febrifuge plant as it reduces fever by inducing sweat.

Cough is a signal created by the body’s defense mechanism to remove the infective organisms from the respiratory tract. If the mucous is very thick, it is very difficult to expel it out. It leads to repeated cough but the phlegm will not be expelled, thus leading the patient to experience chest tightness, difficulty breathing, and mild fever. Kantakari is a good remedy for such conditions due to its anti-inflammatory and expectorant actions. Its anti-inflammatory action reduces mucous membrane swelling and reduces chest congestion. Its expectorant activity loosens up the blocked mucous and helps in expelling the microorganisms.

The whole plant of this herb is useful in preparing medicines. Wash the whole herb thoroughly with water and dry it under sunshade. Then grind it in to a coarse powder and store in air tight container for making decoctions whenever necessary. Care should be taken to prevent the stored powder in contact with water and moisture. Decoction made out of this herb is useful in expelling the phlegm and arrests cough. Fine power made out of its fruits can be mixed with honey to get rid of chronic cough as well.

2 Responses to “Bid GoodBye to Cough with Kandankathiri”

Leave a Reply to Mohit